Peter Hossli, a curious reporter who always finds a good story
1
Photographer Gilles Peress has been in conflict areas around the world for the past 30 years to portray reality – no matter how horrific. He has been in the midst of the Iranian revolution and the genocide in Rwanda to raise public awareness of global issues. And while he is often in the hot zone, he believes adrenaline is addictive and dangerous. 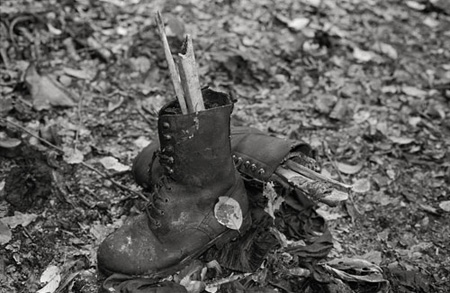 The doorbell is broken, and a handwritten note on the door requests visitors to knock at the window. The door opens promptly, and two curious and alert eyes stare out from a face topped by a head of curly gray-white hair. “Welcome,” says Gilles Peress, his gentle voice betraying a French accent. He leads the way through to the garden, lights a cigarette, takes a sip of coffee from a paper cup, and makes the visitor feel relaxed. “Living in Brooklyn is like living in paradise,” says Peress, who lives in a smart brick house in this quarter of New York together with his family. “Yet the chaos in my head is greater than the chaos outside, so I have the perception of not being at peace.” This also explains why this photographer has been drawn to extreme places for 30 years. To places where wars rage and human beings do inhuman things to one another. “I am more comfortable when the external chaos is greater than the chaos within,” he explains. “That’s when only what is really important counts.”

Born in France in 1946, Peress has encountered chaos on many occasions. After experiencing the Paris Spring of 1968, he documented a long strike at a coal mine, and religious strife in Northern Ireland. At the end of the 1970s he experienced the Iranian revolution up close. Then he found himself avoiding sharpshooters in Sarajevo. In stirring documentary fashion he photographed the mass graves of Srebrenica and Vukovar, as well as the chilling scenes of genocide in Rwanda. On September 11 he captured the southern tip of Manhattan as terror came to New York. Soon afterward he photographed war in Afghanistan and Iraq, as “a continuum of history,” as he describes both these and all other conflicts.

For him, there is never a clear distinction between war and peace anyhow. “War is never total war; in the same way, peace is never total peace,” observes Peress. He embellishes this observation with an anecdote. In 1982, during the siege of Beirut, he visited a Lebanese man burned by Israeli phosphorus in hospital. Through the window he could hear a rhythmical “tock, tock, tock” sound. He looked out – and saw a couple playing tennis. At this point he lights a second cigarette. Tenderly he thanks his wife for the coffee that she has just brought him. He talks of his children, who he adores above all things, and the reason why he moved to New York in the 1970s: “I was fleeing the mediocrity of being in Paris.” At the same time he joined the legendary Magnum agency that for years played a leading role in war photography.

Peress does not view himself as a war photographer. For him, journalism’s only appropriate role is to raise wider issues. Nor does he view himself as an artist, although his pictures are collected and exhibited by renowned museums worldwide. “I don’t like labels,” says Peress, before going on to explain why: “Interesting work happens in the no man’s land between journalism, art and cinema,” he says. “Besides my work is never about me. I don’t take myself terribly seriously.” While other photographers might have preconceptions of heroic epics in their heads when entering conflict zones, he prefers to concentrate on the civilian sacrifice alone. “If you look at wars at the beginning of the 20th century, you have civilian casualties amounting to 10 percent, and the armed forces bearing 90 percent. Today that ratio has flipped,” points out Peress, who likes to show precisely this aspect in photos, books and exhibitions. “It’s morally reprehensible to deny this fact.”

History Must be Confronted, Not Ignored

Peress talks in a friendly way, at times radiating charm, at others humor. “I was born in France, but there’s nothing French about me,” he says. His grandfather was a Georgian Jew, a product of the Soviet Union, while his mother came from an orthodox Christian family from the Middle East. He grew up in Paris, where he studied philosophy and political science. Perhaps this explains why he does not like simple explanations or quick conclusions. “I need to understand,” is his response to the question of why he is drawn with his camera into war zones. Nor does he put his faith in the words of media or governments. “I have to go and see for myself.” This is particularly true when the official line deviates grossly from gruesome reality. He simply couldn’t listen any more in 1994, as UN attorneys engaged in pettifogging debate as to whether the massacre in Rwanda constituted “acts of genocide,” or “genuine genocide.” The paralyzing failure of the European diplomatic elite to act drove him to both Bosnia and Croatia. “We need to confront history because we can’t ignore it. It will always catch up with us,” he says. The scenes he records through his camera lens often become pieces of evidence. His nightmarish shots of mass graves in the Balkans served as visual arguments that drove forward the establishment of the International Criminal Court in The Hague.

But Peress is no warhorse. He undertakes painstaking risk analyses. “Carrying out proper due diligence allows you to reduce your risk in percentage terms,” observes Peress, who considers himself “a very low risk taker.” When circumstances require it, he wears a bullet-proof jacket. He travels during the day, as traveling by night is something he considers more dangerous. He prefers armored vehicles to conventional cars. He checks carefully whom he can trust, where the front line lies, and which parties are pursuing which interests. Only when he has examined every conceivable risk will he allow himself to go. “Then I’m in the hands of God, and I enter a different spiritual and mental sphere.” This is the way he feels he can photograph, “otherwise I couldn’t do anything.”

He admits to knowing the feel of adrenaline flow. “I know the adrenaline is addictive, and as with any addictive substance it needs to be handled with the greatest caution.” In his view, it reduces an individual’s clarity of judgment and changes their lifestyle. War photographers who are primarily motivated and bewitched by the adrenaline rush quickly forget why and how they are taking photographs. In the first days of a war, it would be the rash adrenaline junkies and young and inexperienced who would most probably be the first casualties. “War photography is a serious undertaking,” explains Peress, “and should never be about you but about things that are more important than you.” It is precisely this meaningful engagement that he demands from himself – a noble intention that drives a worthy process.

He evades the question about what goes on inside him when he is confronted by atrocities and monstrous acts. This is too personal. But he never suppresses in his mind the situations he is exposed to. “At times my work is underscored by my awe of mankind.” He lights another cigarette. He grew up believing that all people were essentially good – that even when things went wrong the system could be tuned and fixed. Rwanda darkened this perspective. There, 800,000 people were murdered by others with knives in just a month. At that time Peress started to believe that maybe 90 percent of people are malicious by nature. “What saved me is that 10 percent who do things that are good and beautiful,” he states. “Without them I would have sunk into deep depression.” And without the work that he uses to process his experiences, to give them “form,” as he puts it. “The Silence” is what he called his book on Rwanda. It’s a title that expresses the silence after the machete massacres between Hutus and Tutsis, as well as the silence of global opinion and the deep silence that welled up in him when processing the pictures. “When I was traveling through Rwanda there was not a single sound. Not only were all the people dead, but all the animals too, everything.”

Finding the Intersection Between Reality and Fiction

Peress has taken photos of young people from Northern Ireland throwing Molotov cocktails at armored vehicles; others that show rotting corpses or appalling trains of refugees. He has photographed firemen searching in vain for survivors in the ashes of the World Trade Center. He is conscious of the complicated relationship with suffering people that he stirringly depicts. “All important work happens at the intersection between the inner world and the outer world,” is how Peress eloquently describes the terrible dilemma of war photographers who profit from horror. “I always have to know precisely where the intersection between real and fictional perception lies, what is happening in my head and what I’m seeing. Only then can I stand on both sides of the camera.” He argues that this makes possible an authentic situation, and if the intention is honorable, this is what sets a decent process in motion.

Peress usually photographs in black and white, and his pictures at times have a primeval beauty. But can misery be aestheticized, and can the ghastly be made to look beautiful? This is a question that troubles many war photographers. “Compared to those of others, my photos are less beautiful,” argues Peress. “They are more diffuse and highlight the chaos of the situation.” At least he often finds the precise intersection between order and chaos, between calm and turmoil. “If you find any beauty in my photos, then it has less to do with me than with the paradox of life and death, the paradox of history.” The dialectical struggle between form and content is something he thinks immensely important, however. Only if this tension is real between a strong form and a strong content, Peress reckons, can a picture, a book, or a museum installation really challenge. In the end, the content must always win the battle. “But I do find it pathetic when, due to political correctness, the content dominates immediately without that dialectical battle, and what’s on the wall means nothing and is pale.”

Wherever he encounters it, Peress rejects the postmodern critical view that is not possible to present an adequate view of reality. That every picture gorges on a conflict rather than bringing it nearer. That it is therefore amoral to photograph war scenes at all. “These are reactionary theories, thought up by people living in the ivory towers of the academic world,” says Peress. “If there is no adequate representation of reality there is no point of going into the world, and if you don’t go into the world, how in the hell are you going to change it? The alternative would be to do nothing, to stay silent, to stay home,” he says. “But the consequences of this would be utterly horrific for me, the complicity with evil would be intolerable.”

Does he feel that his photos could change the world? Peress is too intelligent to answer this question with a simple yes or no. “I’m a patient man,” he says. Not for him the world of quarterly results, or the continual urge for immediate satisfaction. One thing by itself cannot change the world, nor turn the world’s perception on its head. “It is the accumulation of many small tipping points that changes us,” argues Peress. “Outstanding achievements require a great deal of time, and are never brought about by one individual but by several individuals.” As he points out, he himself participates “humbly” in the course of history. “Whatever you try to achieve, you have to accept that it may not happen in your lifetime.”