Peter Hossli, a curious reporter who always finds a good story
0
As a kid he used to play football in France. In the USA, Tony Parker has developed into one of the greatest basketball players of the modern age. 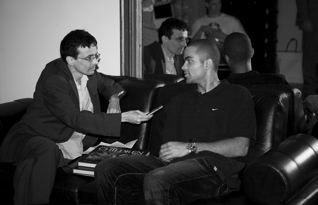 Tony Parker’s a bit on the small side for a basketball player. The San Antonio
Spurs point guard comes in at a mere 6’2″ (1.88m), but that hasn’t stopped him from becoming one of the greatest athletes of the modern era. Last spring his team won the American National Basketball Association league championship. It was Parker’s third title – and he’s only just turned 25. He took the Most Valuable Player award in the playoffs, which, he said, was “just fantastic”.

He sits, completely at ease, on the black leather sofa at a photographic studio in New York wearing blue jeans and a black T-shirt. He is the epitome of cool. “From now on, I’m gonna be mentioned in the same breath as Michael Jordan and Magic Johnson.”

Despite the fact he’s relatively short? That’s never been an issue, explains Parker. “I always manage to find away of playing well.” No one approaches the basket more aggressively; no one is more agile, more full of tricks or more original on court than he is. “I’m driven by one single thought”, says Parker: “I want to be the best.” He strokes his shaven head and exudes self-confidence. “The day I can’t improve any more is the day I stop.”

His first aim in life was to score goals, not shoot baskets. As a boy, growing up in the Paris suburbs, Parker played football, as a centre-forward. His slight build and speed are reminiscent of Thierry Henry, not Shaquille “Shaq” O’Neal. The man who convinced him he should play basketball was Michael Jordan. At night, he’d watch Jordan’s phenomenal dunks and shot jumps. “Little” Tony had soon picked up Jordan’s technique and tricks.” Jordan is still my role model”, he says, “both on and off the court.” Like his idol, he wants to remain a “simple, accessible guy”. Sports-wise, he is still “miles behind Jordan”, says Parker.

But there is one big thing in Parker’s favor: he’s a man of the world. His father is American, his mother Dutch. He was born in Belgium, but spent his childhood and you thin Chicago and France.

“I grew up in two cultures and take the best of both worlds”, says Parker. He spent two years playing in the French league. In 2001, the Texan Spurs took him on board in the Draft, the NBA’s theatrically staged selection process. Home, for him, is the USA and France. He is a European because “I have deep roots there and don’t take anything for granted; I don’t get arrogant and I never lose my temper. “He attributes his self-confidence, mental strength and basically positive attitude to the American side of his nature. He has no idea where his weaker side comes from, but has no illusions as to what it is: “I’m really pigheaded.”

The American sports press occasionally accuses him and the San Antonio Spurs of being boring. Their game is outstanding, but lacks a certain pizzazz: bland, not bold, is the way they are described.” As long as we keep on winning titles, I don’t mind”, says Parker, addressing the “clean-guy” image.

He attaches a lot of importance to life off the court. As an ambassador of the Make-A-Wish Foundation he helps to collect money for children with life-threatening medical conditions. When he finally hangs up his basketball shoes for good, he plans to try a second career as a rap musician and follow his wife into showbiz.

In July, Parker tied the knot with actress Eva Longoria (“Desperate Housewives”) in a big ceremony at a chateau near Paris. The fact that from now on he will be surrounded by paparazzi doesn’t faze him. “Hey, I’ve got no other choice but to get used to it.”