Peter Hossli, a curious reporter who always finds a good story
0
Thabo Sefolosha is the first Swiss basketball pro to play in the NBA world league. We met him at the Chicago Bull’s training centre. 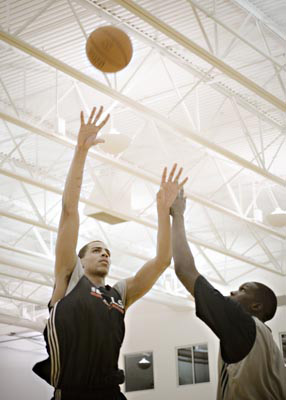 The orange ball slides smoothly along the polished parquet floor. Thabo Sefolosha propels it with a targeted kick against the white wall, from where it springs straight back into his hand. «Wow!» grins the lanky lad. «See that?» he calls over to a buddy who is practicing free throw shooting, apparently unimpressed. «You’re just showing off for the Swiss photographer», he kids. It’s shortly before midday in Deerfield, a suburb of Chicago rutted by eight-lane motorways and joyless shopping malls. This is where the Bulls train, the basketball team once captained by the legendary Michael Jordan. Thabo Sefolosha, 23, the first Swiss player in the prestigious National Basketball Association (NBA), joined the Bulls last summer.

He breathes deeply, his forehead covered in beads of sweat. The training session finished long time ago, but Thabo, who is from the French-speaking part of Switzerland, is still powering up and down the pitch, defending, throwing, and attacking. «Hey, yo, T», shouts Ben Wallace, a tough defender and the new star of the Bulls. «Spread your fingers, that ball flies right by you all the time.» Thabo, who is known to many simply as «T», whirls round, lets the attackers come close – and opens his hands wide. The ball clatters to the ground, missing the basket. «Yo, T, good work!» comments Wallace by way of encouragement. He trots away.

«It’s great to get tips from these guys», Thabo tells me later. «They’re always there to help me, an and off the court.» Sefolosha, who used to play in France and Italy, admits that life in America is not always easy. «It’s another culture with different people, bigger distances – and some of the food is not what I’m used to», he comments. And there is very little time to come to grips with his new culture: Thabo works seven days a week. Training is in the morning, from nine thirty to midday, followed my massage, medical attention, time spent studying opponents and then lunch. If there is no evening game scheduled, the afternoon is given over to interviews with the press. There’s visit to a local chocolate factory on the agenda today. Playing to the camera, he pours a ball shape out of the liquid coca mass. He rarely arrives home before six, and plays three or four matches a week over here compared to one back in Europe.

Thabo Sefolosha knows America from the inside: «in the bus, the plane, and the hotel». He plucks a paper cup from a dispenser, fills it with Gatorade and gets comfortable on a folding char. He’s set aside 30 minutes fro the reporters before going back to honing his body, «his working tool», as he says. «I train, nurture and take care of my body», he explains, conscious that a long career depends on a superb physical condition. At two meters, Thabo looks slightly gaunt against his teammates, his shoulders are narrower, and the muscles on his arms and legs are not quite fully formed. He knows the players his is up against for a regular place on the team are stronger than him. He plans to add 6 kilos to his body weight over the summer break, taking him up to 103. «I’ll eat healthy and lift weights.» He hopes muscles will make him more aggressive. He still looks a touch too nice, to well brought up, a model of Swiss decency. But Sefolosha also likes to point out that his Swiss heritage is only part of the story. «I’m just as much a South African», he says. «Sure, I played basketball in Switzerland, but that was just by chance. It could easily have been in South Africa.» That’s where his parents – an artist from Montreux and a saxophonist from Johannesburg – met, and that’s where he was conceived. But mixed marriages were not allowed under the Apartheid regime of the 1980s, so the couple wed in the Kingdom of Lesotho. «Thabo», in Sesotho, one of the official languages, means as much as «hope».

«It’s great doing something I love»

Racial separation drove the family back to Lake Geneva in 1984, where Thabo was born shortly afterwards. He started playing basketball with this brother. He’s obviously passionate about the game, and says: «There’s nothing better than dribbling across a court, going for the goal and slamming the ball into the net.» For a year he played in Switzerland. At 17 he moved to Chalon-sur-Saone in Burgundy and spent three years defending for Elan Sportif Chalonnais. He had a stab at applying for the NBA at 20, but wasn’t selected. He then signed with Angelico Biella, a top Italian club in the Piedmont region before reapplying for the NBA draft last summer. The Philadelphia 76ers drew Sefolosha, but immediately passed him on to the Chicago Bulls, a team that is now on the verge of a new lease of life after the Jordan era. Helped along, too, by Swiss qualities, Thabo hopes.

Sefolosha is under contract for two years, for 3 million dollars. Back in Italy, he earned 3000 euros a month. What does money mean to him? He pauses to think, obviously finding the question rather difficult to answer. He casts around for something to say, «It’s great to earn money doing something I love.» He’s bought a car, a Volkswagen Touareg, a home for himself and his girlfriend, he goes shopping for food, does what he can for children from South Africa and helps his family, to. He saves the rest. «I could break a leg any time, and that would be the end of it.» Is he motivated by money? «Of course, who wouldn’t be? If I play well, I get a better contract and more money.» That’s what makes the NBA best league in the world. «Everything’s a show in the USA, and a show needs stars, fantastic players; and they come, because no league pays better.»
By Peter Hossli (text) and Robert Huber (photo)�

Thabo knows he’s not a star yet. The Bulls have made it to the play-offs, but Thabo has rarely played a full game. «The first year is my apprenticeship year, the breakthrough will come after.» His skills as a player are important, of course, but so is his image. Shy and quiet, he remains modest: «I’m the newbie from Switzerland who made it into the NBA, even though no one thought I would. And I worked hard for it.»

Thabo is undoubtedly a talented player, but more than that, he’s a grafter. And if further proof is needed that he’s no wild guy, you only have to check out his tattoos, one on his left shoulder – «The Game Chose Me» – and «Good Guides My Steps» with a bare foot o his right lower arm. «God let me to the Bulls. I remember that every time I look at my arm.»