Peter Hossli, a curious reporter who always finds a good story
2
Tennis superstar Serena Williams talks about her life beyond tennis, what she discovered in Africa and why she admires the Google guys. 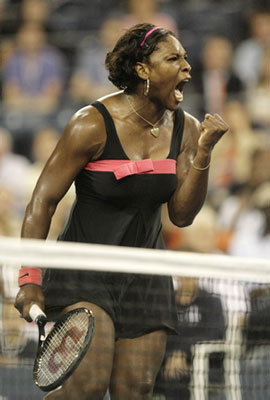 Ms. Williams, where are you?
Serena Williams: Right now, I’m in Moscow, and I’m about to go to bed.

When you wake up, do know in what town you are?
Williams: Yeah, I always do. But I know a lot of players who forget.

You’re traveling nonstop. How do you take it?
Williams: It’s hard. I always feel sick. My body always hurts.

How do get through a season?
Williams: I just go on and play. This is my job.

You’ve been on top of the rankings, but you’ve also fallen pretty deep. What does it take to be the best?
Williams: For me it’s all about being healthy. As long as I’m healthy, I feel confident about myself.

How do you keep it up? How do keep sane?
Williams: It’s not easy. It’s hard. I have to keep the desire to be the best, the desire to constantly work on my ranking. This desire keeps me going.

Not always. You’re unbeatable if you motivated. But you lose if you don’t have any interest.
Williams: It’s not easy for me to keep motivated, because we play so much. It’s easy to be motivated in January, but it gets harder in November. Right now it’s all about me wanting to get my ranking up and do better.

You could dominate women’s tennis the same way Roger Federer dominates men’s tennis. Instead you focus on other things, like modeling, acting or fashion. Why the distraction?
Williams: I have to do what I enjoy. If I want to do acting, designing or modeling, then this is who I am. It might not work for anyone else, but I need to do what I’m going to enjoy.

Why is it not enough for you to be the best tennis player in the world?
Williams: Because there is so much more to me than just tennis. If you see may Hewlett Packard commercial you see what I mean. I’m more than just a tennis player. I’m a designer. I’m a thinker. I like to write. I like to do a lot of different things. While I’m doing all this stuff, I can still be a great tennis player.

Again, these things distract you from tennis. Why do you need to make clothes?
Williams: Why stop at tennis? I’m talented at those things. I’m not going to play tennis for 50 years, but I can do other things like design and modeling for a long time. I was always taught to make sure to have something to fall back on.

You once said you’re not just a tennis star but a superstar. What do you like about the celebrity lifestyle?
Williams: I don’t like living that lifestyle. I like living my life. What ever comes along with it comes a long with it. I don’t try to be a celebrity. I’m just me. And that’s what’s unique about me. I’m not trying to get attention. Something is always coming my way.

Last year, a deep crisis came your way. You fell from being number 1 to number 81. You had a tragedy in your family. You got injured. Critics say you lost interest. You even walked away from tennis. Why?
Williams: To be honest, I really needed to get myself healthy. I never really got healthy after a surgery. While I was getting better physically, I also took a mental break. It was a very good time. I got to do things I never experienced before. I’ve been playing tennis since I was two. Now I took this break, which I really enjoyed.

Last January you came back and won the Australian Open – to everybody’s surprise. How did you turn yourself around?
Williams: I have always had a tremendous will to win. I did not want to lose this will. I wanted it back. That’s why I won.

What did you learn from your time off?
Williams: I grew up a lot. Even though I’m still very young at heart and in looks – I’m still just a kid – I’ve grown up so much in this time. I learned what I can go through, and what I can endure.

You Google your opponents before you play them. Does it really help?
Williams: It always helps knowing what my opponent’s strengths and weaknesses are. I have to do my research. Often I’ve played them in the past so I take from my own experience or I’ll talk to my sister.

You’ve made a lot of money winning tournaments and getting endorsement. What influence does this financial success have had on your motivation?
Williams: Financial success has absolutely nothing to do with my motivation. When I was growing up I never wanted to play tennis for money. I wanted to win the US Open. I wanted to win in Wimbledon. I wanted to be number one. Nowadays, people want to play tennis or they want to be famous because of the money. That’s the beauty of why I’ve been so successful. I never played for money. I never even pick up my check. Whenever the tournament is over, they have to mail the check to me or they have to remind me to pick it up. Because I don’t play for the check, I play for my ranking and I play to be the best.

How important is winning to you?
Williams: Every tournament I enter, I go in with the idea that I will win. That’s what keeps me motivated-the desire to be the best.

Who do you win for?
Williams: I win for myself.

What does money mean to you?
Williams: Money is just another thing. Obviously, my life has changed. But it doesn’t change how I am as a person. I’m always going to be me. Money doesn’t mean the end of the world to me. Granted, it makes my life easier, and it makes things more accessible, don’t get me wrong. But it doesn’t make who I am as an individual.

You’re dad once said it was his ambition to make wealthy women out of his daughters. What have you learned from him?
Williams: He had this thrive to make us successful. But our goals, my sister’s goal and mine, were always to win championships. It was never about money.

You started playing tennis as a small child. What does a toddler aspire to?
Serena: I always wanted to be like Venus. When she was successful as a young tennis player I wanted to do the same.

How is the life of a child star compared to other children?
Williams: When you are a kid you don’t know what other kids are going through. While we realized we were not like everybody else, we didn’t question it because that is what we were used to.

You started out as the little sister. How did chasing a sister affect you?
Williams: It drove me to be the best tennis player that I could be. Venus has always been my toughest competition. Practicing with her and playing against on the tour has made me a better player. It is a huge motivator.

How has the chase affected your relationship?
Williams: Some people would think that our competitiveness would hurt our relationship but it actually makes us closer. She’s my best friend and I love her. But when she’s on the other side of the court, I try to beat her.

For the first time this year, women earned the same prize money as men at Wimbledon. Why did it take so long?
Williams: It sad that it took so long. It just shows that this is the world that we’re still living in. What minorities have to go through, minorities meaning what women have to endure.

You got a 55 million dollar endorsement deal from Nike, which makes you one of the best-paid female athlete. Men like Tiger Woods or LeBron James get more than double that amount. Will women ever catch up?
Williams: There is always a time and a place for everything. Hopefully I’ll be around for women to catch up.

You’d deserve it. People say that you and your sister Venus saved women’s tennis. True?
Williams: I like to believe that we did. We definitely had a lot to do with changing women’s tennis. We made it a much more athletic sport.

Can women’s tennis survive without the Williams’ sisters?
Williams: I suspect that there will be a lot of players that will make women’s tennis more exciting, but I really don’t know whether this is true. What I know is when I’m gone I’m going to be gone.

What’s coming after tennis?
Williams: I don’t know. I have a lot more tennis in me and I’m looking forward to winning more tournaments and Grand Slams.

Some players will not miss you. Do you have real friends on the tour?
Williams: I get along with everybody. I’m trying to be very professional.

It seem that there are way more catfights between female players than between male.
Williams: Yes, that’s true. That’s just women. Women are always a little more pettier than men. Men can put up a fight and in the next five minutes they are best friends. Women have never been like that.

The public enjoys those catfights off court, like the one you and your sister had with Martina Hingis or your latest clash with Justine Henin.
Williams: I never had any argument with Justine Henin. I don’t know what you’re talking about. I don’t have any problem with anyone. I’m just out there playing tennis. Listen, I’m in Moscow and its time for me to go to sleep. Can we do one more question?

Okay, last November you traveled to Senegal to a place where African slaves where shipped to the new world. Why?
Williams: My whole life I wanted to go to Africa. That’s where I’m from, somehow. I was finally able to reach my roots. I went to where I belong. A lot of people in America know their history. Unfortunately, I, as an African American, don’t know my history. This was an opportunity for me to go to Africa and learn about my history. I learned who I was and this made me a stronger person. I love Africa.