Over the past few years I’ve had an uncomfortable sense that someone, or something, has been tinkering with my brain, remapping the neural circuitry, reprogramming the memory. My mind isn’t going—so far as I can tell—but it’s changing. I’m not thinking the way I used to think. 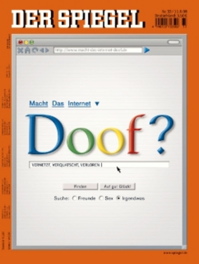 Today, German weekly magazine Der Spiegel published a cover story on the effects of the Internet on the human brain. It is titled “Macht das Internet Doof?” Three writers write about how the Internet has changed the way we think, act and learn.

Of course, the Spiegel piece is well written, well researched and it also references Carr’s ideas. But the German story might be a perfect example on how the Internet is making journalism and journalists both stupid and lazy. Instead of coming up with original concepts, writers and editors of well regarded magazines like Der Spiegel often just surf the web for ideas. Or they adapt other magazine’s stories and pretend to be original.

What’s really funny: Der Spiegel blames the Internet for creating a culture of copy pasting. In my opinion, there is no other industry that has embraced copy and paste more widely than journalism.

By the way, critical voices about the Internet are not all that new. Ten years ago, the now defunct Swiss magazine Facts published a cover story titled “Alptraum Internet”, Nightmare Internet.