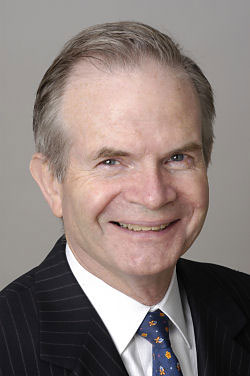 On how Murdoch’s approach differs from the Bancrofts’:

Steiger: It’s changed dramatically in the sense that the new owner is a serious newspaper proprietor. And he’s got ideas about how the paper can improve, expand its audience, have more impact. And so he’s gonna be much more of an activist. Whereas the Bancroft’s delegated control to the board of directors and management.

On whether he sees a culture change at the Wall Street Journal.

Steiger: I don’t know. All I know is what I see in the paper. And the paper looks fine to me.

On whether the view on business journalism has narrowed since Rupert Murdoch bought Dow Jones.

Steiger: I don’t know what they’re talking about. I don’t see any narrowing of the definition of business. On the contrary, the paper seems more interested in covering or the paper seems interested in more coverage of politics and foreign affairs than ever before, without giving up its business franchise. So anybody who tells you that they’re narrowing the definition of what constitutes business, that’s just nuts.

On whether a sports section, more political news and fashion coverage will endanger the Journal’s niche.

Steiger: If you do it ineptly, sure. I don’t see any evidence that they’re gonna do that. I mean so far they’ve been retaining their dominance of business coverage. And they’ve been adding other stuff. As long ago as I can remember, the Journal’s always had strong political coverage. Strong coverage of social trends. Strong coverage of foreign affairs. Not tons and tons in terms of column inches. But very strong, well selected pieces. And so to say that the Journal narrowly defined its niche and stayed there in the past is just wrong. The Journal’s always taken a broad view of what business readership is interested in. And has attempted to provide that. And what the new ownership seems interested in doing is intensifying the coverage of politics in international affairs. And but not losing the dominance of business coverage. I don’t see anything wrong with that as a strategy.

On whether Murdoch’s capital infusion has improved the morale at the Journal after years of downturns and layoffs.

Steiger: I never place much stock in assessments of morale. I think that there are always things to worry about. And journalists are trained to see risks and dangers. And so there’s always in any newsroom, there’s always a certain amount of apprehension. Now in recent years at the Journal there have been two powerful reasons for apprehension. One is the chaos that’s taking place in the business model of print newspapers. And that has people rightly concerned about the future of the business. And then there’s the arrival of new ownership, which on the one hand you’re quite right, has brought new money. I mean the Journal is one of the few daily papers that’s expanding.

But it’s also brought apprehension over what kind of changes might occur to the culture. And that apprehension was stirred by, you know, making a change in the managing editor so quickly. You can expect to have a certain amount of turmoil for a while. But it’s turmoil that is mitigated to some extent that unlike, you know, let’s say the New York Times and the Washington Post, two great papers which are going through buyouts and layoffs. The Journal in general is – while it’s made some targeted cost reductions – it’s been expanding its investment in the product.

On the future of business journalism.

Steiger: It’s instructive to think in terms of what’s going on in print journalism, as an analog of what has happened in the music business. You know, the music business has been totally transformed by the Internet. It’s no longer possible to sell huge numbers of CDs at $18.49 a pop. Because you can go on iTunes and get individual songs for .99 and I forget what it costs to buy an album, you know, $9.99 or $12.99, something like that. And if you’re a, you know, a teenager or a college kid, you go on and get ‘em for nothing with file sharing. But does that mean there’s no music? Of course not. There’s more new music than ever before. And there’s a certain analog to that in the newspaper business. Where the web is making available for free all the announcement news. I mean you get the wires for nothing. Business news. Sports, weather statistics, stock prices and opinion, you know, more opinion than you’ve ever seen before.

There are two main avenues. One is the non profit sector. The second domain is what I call a cross subsidy. Where you have a diversified corporate entity, which includes one or more print newspapers in the mix. It includes investigative journalism or foreign correspondence in the mix. And there are more examples of that than you might think. Washington Post company now is a perfect example of that. It’s got Kaplan. Its educational side is bigger than its news side. And the existence of Kaplan within the company permits the subsidy of the Washington Post newspaper and Newsweek Magazine. And the broader company probably benefits from having those entities within its walls because it gives greater prestige, gravitas to Kaplan.

Another example is Bloomberg. Bloomberg could probably get along just fine with between 500 and maybe at most 800-900 journalists to cover its business bases. But there are like 2,200 journalists at Bloomberg. And they cover all kinds of things. And now why do they do that? I think in part because it helps promote the Bloomberg name. But secondly it casts the Bloomberg company, in a quasi-public service kind of posture. So there are cross subsidies there.

On Rupert Murdoch’s interest in the Wall Street Journal and Dow Jones.

Steiger: Well I mean I think he hopes to make money. But I also think that he’s looking to expand his own influence. And one can imagine a variety of scenarios under which the fortunes of News Corps as a whole would be enhanced by having something as prestigious as the Wall Street Journal in the company.

Steiger: The most likely scenario is that he increases the penetration of the Wall Street Journal’s journalism. And thereby increases the revenues and profits of the newspaper itself. And also enhances the ability of other entities within News Corps to get access to the properties and the investment partners and the political and regulatory leaders that they would like to have access to.

On whether this is an golden age for journalism.

Steiger: The golden age is over. It may well be replaced by a new golden age. There’s gonna be a lot of heavy digging to find the vein.

On what will happen to this legacy.

Steiger: I have high hopes that it’ll be enhanced.