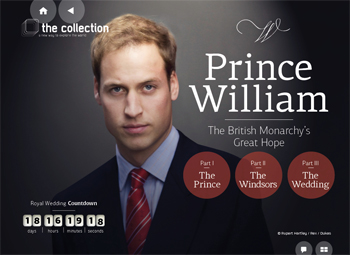 Today sees the launch of the collection of an iPad magazine that I have developed over the past few months in conjunction with creative director, Stéphane Carpentier, and under the guidance of Thomas Trüb.

The international magazine is published by the Swiss media group, Ringier. It will initially appear monthly in three languages: German, English, and Chinese. Each issue will be sold for $5, and its potential readership includes 20 million iPad owners.

Each issue is dedicated to a particular topic, and each theme is approached in all available formats. We commission essays and feature stories, publish photographs, videos, and interactive graphics, and take a look behind the scenes. And, if that wasn’t enough, we also tell stories with interactive graphics, 3D animation, and humorous features, such as rubbing and motion sensitivity. In short, we’re looking for new forms of journalism.

Our underlying thematic policy is to be contemporary, entertaining, and globally relevant. We choose stories that are of interest worldwide, including social issues, political, economic, and scientific issues and sports.

The first issue is dedicated to Prince William, the British monarchy’s great hope. The second issue will be on reproduction.

Overall, management is in Thomas Trüb’s hands. Stéphane Carpentier acts as creative director and Peter Hossli is editor-in-chief. Our developers are Marc Carrard and Romain Rosay, all of whom work at Ringier. We have offices in Zurich, Ho Chi Minh City, and Lausanne.

The idea was born in Thalwil. In the spring of 2010, Thomas Trüb conducted a workshop on the banks of Lake Zurich. He was looking for projects connected to the iPad, introduced in early 2010. Towards the end of the day, I said, ‘Why don’t we produce a journalistic product? A magazine for the iPad?’

Trüb, himself a former journalist, seemed enthused by the prospect of launching a new journalism project.

At the time, I was thinking more of a news magazine along the lines of Focus or Der Spiegel, but there are a lot of news sources out there; the expenditure would have been immense. Setting up an editorial office that can analyze the week’s events and render them in multimedia formats is no easy task.

We developed ideas and looked for opportunities to tell stories in an entirely different way that was tailor-maid to the requirements of the iPad.

We soon met with technical limitations: we could either invest several million in expensive developments, or we could produce in conjunction with Woodwing, and our products would end up looking like the other iPad magazines.

We rejected both options. Stéphane got lucky with Ringier Romandie in Lausanne; Marc Carrard and Romain Rosay had developed their own production system, the idea behind which is simple and expandable. We had found two perfectionists who could realize all of our needs.

Our editorial office is still small and nimble; we are currently expanding and looking for talented journalists who are able to tell stories with more than just text and pictures, write well in German and English, and are eager to work on the collection.