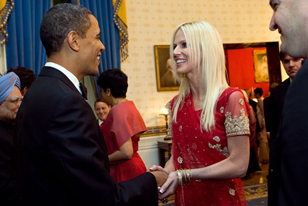 As the White House released a photograph of a face-to-face encounter between President Obama and the couple who sneaked into a state dinner last Tuesday, the New York Times has a good story to report. It seems as if Michaele and Tareq Salahi of Virginia just wanted to make it into a reality show.

The Times calls them “aspiring reality-show celebrities”, two folks who really wanted to be on TV. For weeks they were on a trial run to join the cast of “The Real Housewives of D.C.”, a Bravo show. The couple was filmed right before they went to the state dinner at the White House. They were probably hoping that the act would give them a spot on the show.

This seems to be a classic “Life the Movie” moment. Back in 1999 author Neal Gabler describes in his book Life the Movie: How Entertainment Conquered Reality, how low-brow entertainment overtakes reality in the United States. People act as their lives are moves. Gabler: “It is not any ism but entertainment that is arguably the most pervasive, powerful, and ineluctable force of our time–a force so overwhelming that it has finally metastasized into life.”