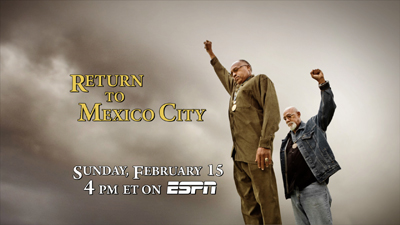 American athletes Tommie Smith and John Carlos are responsible for one of the most enduring pictures in the history of sports.

In 1968, Smith won a Gold medal in the 200 meter sprint at the Olympic Games in Mexico City. Carlos reached third place. During the award ceremony they put up their fists in protest against racial discrimination in the USA. With one silent gesture, Smith and Carlos created a powerful moment. Without words they captured the sentiment of Black America. After the ceremony they were called traitors, anti-American and worse.

Now Smith and Carlos return to Mexico City. A documentary about the trip will be shown on February 15, 4 pm ET on ESPN.

To learn more about Tommie Smith, read the interview I conducted at this house outside Atlanta.