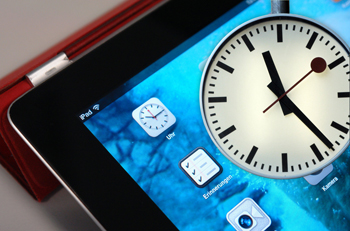 With the release of iOS 6, Apple introduced a watch and an alarm clock to its popular tablet computer iPad.

According to Swiss daily «Blick am Abend», Apple did not ask for permission to use the destinguished design. Now SBB wants money from Apple. «Blick am Abend» quotes SBB spokesperson Reto Korman: «We’re trying to get in touch with Apple to settle this unauthorized use [of our design] legally and financially.»

SBB owns the copyright to the clock. Originally it was designed by Hans Hilfiker in 1944. Today, the clock is among the most famous Swiss design icons.

Back in 2009, developer Thomas Feger launched a clock App with Hilfiker’s design. He had SBB’s permission. Feger calls Apple’s move «brass.» He believes that company was inspired by his App.