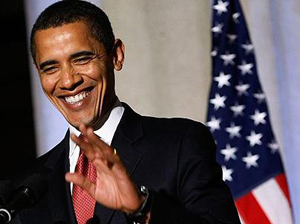 Robert McDonnell, a Republican and a former state attorney
general, won a decisive victory in Virginia’s governor’s race
Tuesday. Before, Democrats held have held control in that state for the past eight years.

One wonders whether Barack Obama’s magic has worn off after less than one year in office. U.S. voters seem to have realized that his superior style does not generate real results.

Should this trend continue, Democrats face a debacle in next year’s mid-term elections. If the Republicans come up with a strong candidate – a Ronald Reagan type – they might be able to unseat Obama in 2012.

Is all style but no substance already history? Obama might go down as “Twitter-Jimmy” – in reference to his constant use of New Media, and the once hopeful but eventually short presidency of Jimmy Carter.

Obama has shown that he understands New Media as a great marketing tool. But as everybody else he’s not been able to turn it into real value.

A footnote. Jimmy Carter got his Nobel peace price for hard work many years after leaving the White House. Obama got his this year for, well, not much at all.