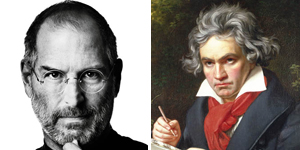 Recently I interview author and management guru Jim Collins for Swiss magazine Bilanz. He talks about how great leaders are driven to do great things. He elegantly links Apple CEO Steve Jobs and Ludwig van Beethoven:

What does Jobs have that others don’t?
Collins: Steve Jobs is an industrial Beethoven. I think that the Macintosh is like the Third Symphony. And the iPod is like the Fifth Symphony. And maybe the iPhone is the Seventh Symphony. I admire his dedication to creating great things, tremendously. He’s one of the people I really admire.

So Jobs might be admired for the wrong things. He mostly took existing ideas, put them together and turned them into great things.
Collins: They’re no great things without the supreme execution around them. A lot of other people have the same ideas. A lot of people could have had the idea of “Bum bum bum baba baba bum [humming Beethoven’s Fifth].” But not everybody could have written the Fifth Symphony.