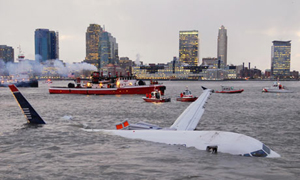 It didn’t take long for the news media to find a catch phrase for the water landing performed by an US Airways pilot this afternoon on the Hudson River in New York. CNN as well as other networks describe the accident as “Miracle on the Hudson”. Even British newspapers invoke a supernatural act.

What miracle? All 150 passengers and 5 crew members survived because good people did their job right. It was not a miracle. It was a great performance by professionals.

The pilot and the crew are trained to do what they did. The Coast Guard, ferry captains of New York Waterways, New York City police and fire fighters reacted quickly and bravely. Doctors in local hospitals were prepared.

Calling it a miracle diminishes their bravery and their skills. “The pilot did a masterful job”, as mayor Michael Bloomberg said.