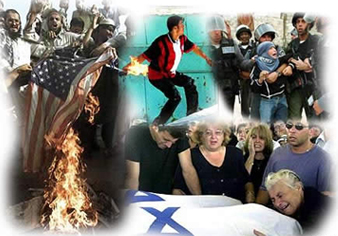 Gaza is on fire. Hamas has deployed longer-range rockets capable of hitting Israeli cities. And what else is new?

Since I was a little kid, the news about the Middle East has been grim. Israelis are killing Palestinians, I’ve been hearing on the radio for years. Palestinians are killing Israelis, I see on television almost every day. American Presidents who promised to solve the conflict came and went without results, I’ve read in countless newspapers.

What to do about it? Trying another international peace process? I seriously doubt it will work. My solution is different and a bit radical: we should all stop to care for some time.

1. The media should stop reporting about it immediately and completely. No more news about the Middle East conflict. No more magazine features. No more documentaries and feature films. No more books.

2. All parties involved should stop sending weapons to the region.

3. All peace efforts by outside organizations, diplomats and governments should be halted immediately.

This, I believe, would force Israelis and Palestinians to come up with a solution from within. The two parties actually have to find peace outside the spotlight of the world media. Profiteers of this never ending conflict – such as reporters, artists, bloggers, diplomats, NGOs, politicians – had to come up with something more productive to spend their time.

If it doesn’t work, then nothing will. Ever.