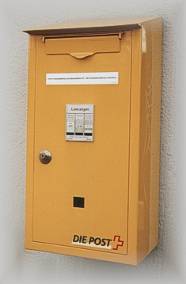 In Switzerland, even gangsters try to be efficient and civilized. On August 1, my wallet was stolen by a group of sophisticated pickpocket artists. They observed me while I took out some money at a Cash machine. Five minutes later, my wallet was gone – snatched from my pockets in a small Swiss town called Baden.

“This happens all the time”, a police officer told me later. “They always attack in groups”.

Of course, I was devastated. All my important ID cards plus a couple of credit cards were stolen. Immediately, I canceled my credit cards, and filed a report with the local police.

Three days later, I received an e-mail from a local postmaster. The Post Office found my wallet in an official yellow Swiss mailbox. All the cash was gone, obviously. But my ID cards, credit cards and even old receipts were still there, completely untouched. “Thieves do this very often”, the postmaster told me. “They take the money and throw the wallet in the next mailbox.”

Wow. One has to be impressed by Swiss thieves. Where else in the world do gangsters show empathy for their victims? In Switzerland, thugs keep the money but make sure to get everything else back to the rightful owner.