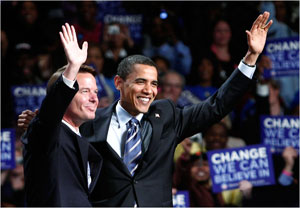 The Democrats are playing a dangerous game. They ignore the sentiments of two crucial demographics they need desperately if they want to beat John McCain in November – women and rural voters.

Yesterday, Hillary Clinton beat Barack Obama by more than 40 points in the crucial swing state of West Virginia. Not since 1916 have the Democrats won the White House without winning in West Virginia. Obama’s poor showing demonstrated once more his weakness among rural voters, and among women. Both groups have been deciding American elections for decades.

It looks very unlikely that Clinton can turn this primary contest around. But the image of two aggressive looking guys rubbing it into her face is certainly not attracting many women who had hoped to finally see a female president.