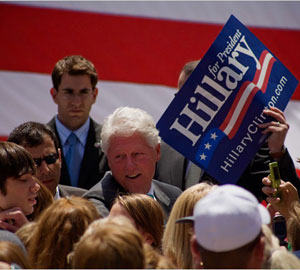 Much has been said about Bill Clinton’s apparently meager performance on the campaign stomp. The Daily New asked the questions whether Clinton lost his mojo after his heart bypass surgery in 2004. Some even suggested he is jeopardizing the candidacy of his wife on purpose.

Most of it has been anti-Hillary rhetoric, as the New York Times explains in an enjoyable piece of Clinton-nostalgia. Writer Adam Nagourney describes how Bill Clinton got his groove back, and how he really enjoys campaigning in small towns.

He seems to be believe that Hillary Clinton can still win this race. Should she upset the Democrats by winning Indiana and North Carolina, Nagourney argues, her husband deserves a big share of the credit. Just like in 1992 the former president seems to be willing to work “until the last dog dies”.