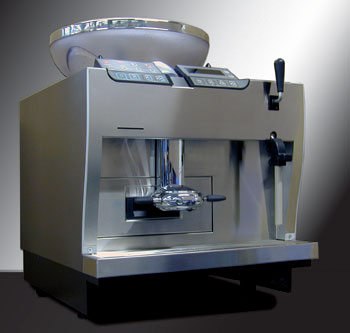 A little more than a year ago, Starbucks CEO Howard Schultz warned in memo about “the commoditization of the Starbucks experience”. Schultz specifically blamed the Swiss made espresso machines, which “blocked the visual sight line the customer previously had to watch the drink being made, and for the intimate experience with the barista”.

Swiss manufacturer Thermoplan was worried. At the time of the memo Starbucks bought 50 percent of their production. Since 1999 Thermoplan has been delivering automated espresso makers to every Starbucks store around the globe.

Thermoplan acted fast. They’ve just introduced a brand new machine, specifically designed for Starbucks. It is called Mastrena (pictured), and it looks like it was designed by a prop master for “Star Trek”. Schultz calls it the “gold standard among espresso machines”. It’s much lower profile enables baristas to connect with customers.

Starbucks wants to aggressively rollout the new machines. By the end of the year, 30 percent of all U.S. stores should have it, by the end of 2010 the Mastrena rate should stand at 75 percent.

Thanks to the Mastrena, Thermoplan will increase its revenue by 35 percent. The small, family owned company in Weggis, Lucerne, will hire an additional 40 employers to manufacture the new machines. Their dependency on Starbucks also increases. From now on, the coffee chain giant buys up 65 percent of Thermoplan’s production.

Early last week, Starbucks managers traveled to Switzerland and threw a mountaintop party for Thermoplan’s 210 staff members. “They told us that Starbucks wouldn’t be where they are without us”, says Thermoplan managing director Adrian Steiner.