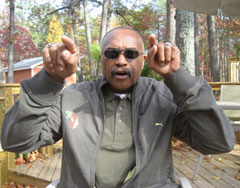 Last November, I met Olympian Tommie Smith in his house outside Atlanta, Georgia. At length, we talked about his silent protest during the award ceremony at the 1968 Olympics in Mexico City. This week, I called him by phone to discuss the current protests against China. He doesn’t support attacks on the torch rally.

Mr. Smith, will you participate at the opening ceremony of the Beijing Olympics?
Tommie Smith: So far, nobody has invited me. I normally don’t just walk into places.

But will you go to Beijing to watch the games?
Smith: I hope so. The airfare to China is pretty expensive. If I can scrape up the money, I’ll go.

At the 1968 games in Mexico City you protested human rights violations in the United States. Should you go to China now, you’ll betray your basic principles.
Smith: I’ve never wavered my support for social justice, human rights and my opposition to genocide. In 1968 I spoke out against American injustices. I can’t fight for every country in the world. It’s not up to me to speak out against China.

Pro Tibet protesters are attacking the Olympic torch. What do you think about this kind of action?
Smith: By attacking the torch you won’t extend peace. We need conversations, not warfare. Olympic games can encourage human interactions. They’ll lead to peace, not boycotts, not war, not bullets. 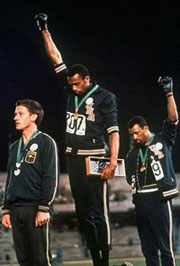 Why do you criticize protest? You also were a protester.
Smith: Mexico City was non-violent. There was not a word said; there was not a rock thrown; there were no flames put out. Tommie Smith started a conversation without saying a word on the victory stand in 1968.

How should athletes speak out against human rights violations in Beijing?
Smith: Whatever other athletes do, it’s their responsibility, not mine. But they would need to talk together and negotiate a platform before they go to Beijing. People can’t just go there and follow somebody blindly.