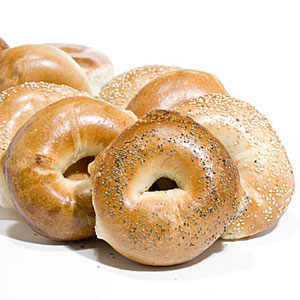 On weekends I normally get bagels for breakfast. Back in January our bagel shop in Brooklyn Heights charged 75 cents for a circle of bread made of yeasted wheat dough, hole included. Not long ago they would give you a dozen bagels for just $6.

My baker explains the pricey treat with higher wheat prices. And he promises the sticker shock will just be “temporary”. Yeah, right. There are two things in New York that’ll never get cheaper – bagels and subway rides. Okay, maybe we need to include apartments as well.

A dollar a bagel tells us much about inflation, which seems to be creeping in everywhere. Wheat really has gone up tremendously, over 30 percent since the beginning of the year, reports the Mercury News. It affects the price of bagels in New York, but also of pasta in Rome, and of tortillas in Mexico City.

Some people blame U.S. energy policy for high food prices. Instead of focusing on conserving, Americans fill their cars with renewable energy, made from corn or wheat. This greatly reduces the land for grain production. Today, Nestlé CEO Peter Brabeck warned that the production of biofuels is endangering food supply.

There is also a connection between the $1 bagel and the $2 that J.P. Morgan Chase is paying for a share of crumbling investment bank Bear Stearns. With recent bailouts by the Federal Reserve Bank gigantic sums of new money have been pouring into the system, without actually creating any economic growth. The result is rising inflation, the underlying problem of the current financial crisis. Especially since the Fed is cutting interest rates rapidly, which fuels inflation even further.

Additionally, the falling dollar is making imports much more expansive for Americans. It’s not just the bagel that is more expansive, but also Italian olive oil, Swiss chocolate or French cheese.

While most economists already see the U.S. economy in a recession, the danger of stagflation looms. This is a combination of high rates of inflation, coupled with sluggish economic growth and unemployment. Or, as commentator Terry Turner calls it, “our worst nightmare”.

Considering this prospect, a dollar a bagel seems a minor problem.