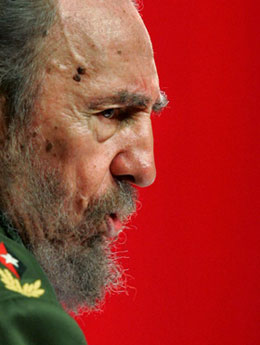 Today’s announcement that Fidel Castro will finally retire left me both happy for the Cuban people and a bit nostalgic for my youth. Back in December of 1993, I traveled to the Havana Film Festival on my first foreign assignment as a very young journalist. I was freelancing for Swiss daily Tages-Anzeiger as a contributing film writer.

For the first couple of days I was pretty hungry. Even though I had dollars to spend, food was hard to find. A visit to the presidential palace changed all that. Fidel Castro invited the festival’s participants to a dinner party. There was plenty to eat. Foreign journalists stuffed themselves on everything the Cuban people didn’t have, and they drank a lot of rum.

After about an hour Fidel showed up, all dressed in army green. His tall black leather booths were shiny. It was a grand entrance. As most of his guests, I went up to him and tried to shake his hand. Suddenly he stood in front of me. He looked very much smitten by himself. I introduced myself as a Swiss reporter, grabbed his hand – and I was rather disappointed. His hand was sweaty, and his shake was weak.

At the palace I realized that Fidel was a fraud. Though he started out with a worthy cause and kicked out a dictator, he became one himself. He didn’t really care about his people. All that mattered to Fidel was Fidel himself.

The festival’s winner was Fresa y chocolate, a critical and very funny film about contemporary Cuba by Tomás Gutiérrez Alea. After premiering at Havana’s Karl Marx Theater everybody had hoped it would be the beginning of the end of Castro’s area. Well, it took another 15 years.

I traveled with a PowerBook 165 to Havana, which had a black-and-white screen and a dial-up modem. I didn’t have e-mail, so I had to fax my story directly from the computer to the home office. The entire staff of the press office was starring into the laptop as it was slowly transmitting from Havana to Zurich. It was my first trans-Atlantic filing.

Of course, my article (in German) was way to long and not very good. I still feel a bit sorry for the editor who had to re-type and shorten it