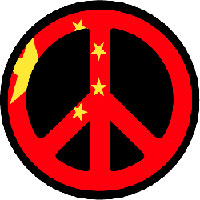 Pacifists and war protesters all over the world wear peace signs on shoulder bags and jeans jackets. But only few know what the symbol really means, and where it came from. ☮

Exactly fifty years ago British designer Gerald Holtom created what would become the international peace symbol. On February 21, 1958 the Royal College of Art trained artist designed a logo for the Campaign for Nuclear Disarmament, the start of the British peace movement. ☮

While it looks like a stylized B-52 bomber or a chicken’s foot, Holtom said the symbol was inspired by the semaphoric signals for the letters “N” and “D”. They stand for “Nuclear Disarmament”. The symbol was first used on Trafalgar Square during a peace march in London. ☮ 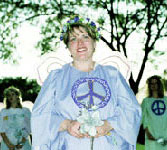 During the 1960s the symbol became a unifier among protesters against the war in Vietnam. It appeared on the walls of Prague when the Soviet tanks invaded in 1968. People painted it on the Berlin Wall. During the 1990s t-shirts sporting the symbol could be seen in Sarajevo and Belgrade. After 9/11 and the many anti-war marches that followed the attacks the symbol had another revival. ☮

Today, it is most commonly seen as the favicon of global classified ads giant Craigslist. ☮