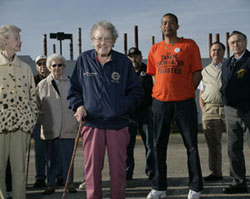 Today, General Motors announced a record loss of 38,7 billion dollars for 2007. At the same time the car manufacturer offered all its 74’000 U.S. hourly workers new rounds of contract buyouts. GM doesn’t say how many people it hopes to shed. But the plan is to replace as many union represented workers as possible with non-union folks.

It will create many more GM ghost towns in America’s heartland. Two years ago photographer Robert Huber and I went to Anderson, Indiana, a town that used to have 20 GM factories with 24’000 GM workers. Now they have none. But Anderson is still doing quiet well. Many retired GM workers still live there, spending their GM pension and enjoying free health care benefits.

Read the feature story in English, in German or in Italian.