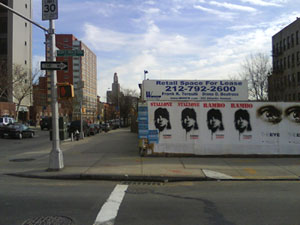 Times are tough. What’s better than bringing back some tough guys from the 80s? As the New York Times points out muscle men like Sylvester Stallone, Chuck Norris and even Mr T. are back on the scene saving us from all kinds of trouble. But I’m more intrigued by Hollywood’s marketing mastery to revive a franchise that was in oblivion for many years.

Tinseltown’s ad folks display some subtle cleverness with the fourth installment of «Rambo». For weeks graffiti-like posters for the movie have been popping up all over New York. They show a silhouette of Sylvester Stallone’s head with paint still dripping as if somebody spray-painted them overnight. 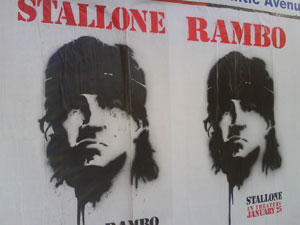 Designers as well as movie buffs talk about them. «It’s a pity they added the words ‘Stallone’ and ‘Rambo’, it would have been much cooler to just show the silhouette», says Jonathan Stein, a friendly art designer in Hollywood. At least, those old Stallone muscles are the talk of the town. They sure look fresh again. Though I doubt that underground graffiti artists will flock the movie theaters on January 25 when «Rambo» hits the screens.