Peter Hossli, a curious reporter who always finds a good story
0
One fall day in New York, DOMO writer Peter Hossli posed next to three men previously unknown to him. They are mega super uber-stars. This is the bizarre encounter between the crusty Metallica rock musicians and a reporter who is clueless about metal rock. 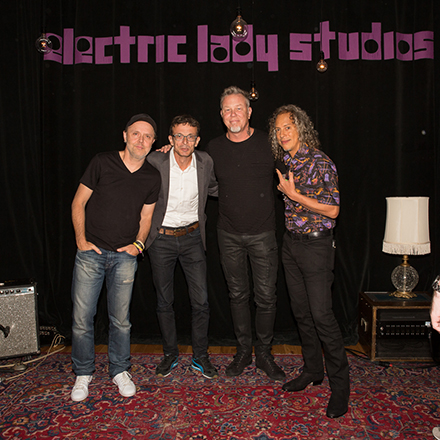 Suddenly three elderly men are standing next to me. Two have hair, one is hiding his bald pate under a cap. We all smile into a camera. The big guy puts a hand on my right shoulder. The flash pops. Once, twice, three times. Done. They hold their warm hands out to me. «Cool, man,» says the shortest member of the trio in English. He has a Nordic accent.

They push me further to the left. An Italian reporter is already lined up. Again, the big guy forms the group into a quartet. The flash pops. Once, twice, three times. «Cool, man.» – with a Nordic accent.

Until right before that meeting I had no idea who these men were, what their names were, what they looked like. I was thinking: Why on earth would they want to have their picture taken with me?

It’s because they are mega super uber-stars.

They are the members of the American thrash-metal band Metallica with a new album out which is supposed to become a worldwide event. They once played in Moscow to almost two million fans, my colleague at the next desk over tells me. He appears to be jealous that I would meet them, these hard – surely the hardest – rock musicians in America.

It was quite literally out of this world. In September I’d reported on the US election campaign and attended the first TV debate between Donald Trump and Hillary Clinton. This took place in New York, which is where, the following day, Metallica welcomed the press to listen to their music. As I was in New York anyway and Ringier wanted to save itself unnecessary travel expenses, the Metallica expert on our editorial team sent me to this «listening». This was set up not just anywhere but at the legendary Electric Lady Studios in Manhattan, where Jimi Hendrix (†27) once used to rock.

It is lunchtime. Maybe fifty music journalists from Europe are standing in front of the entrance. Some are wearing Metallica t-shirts. Are they fans or journalists? Or are the boundaries blurred? I definitely stand out in my suit jacket and white shirt.

A narrow hallway leads down to the studio. Everybody is nice. «You are being filmed; it’s for promotional use,» a sign says. Journalists writing about music are used as extras in a commercial promoting that same music.

At the entrance we all obediently exchange our electronic gadgets for notepads and pens. No one is supposed to record and distribute the Metallica album. So it boils down to: journalists are fans, extras for commercials – and they are considered potential thieves.

To make up for this there is free beer, four different varieties, and water, but no food. Suddenly there is applause, closely followed by a Nordic accent. «Nice to have you here,» says Lars Ulrich (52), the Danish guy. The founding father of Metallica is said to be to be the hardest drummer in the world.  He is holding a can of Perrier water; a toothpick dangles from the corner of his mouth. He asks everyone where they’re from. Italy, Germany, France, Switzerland, Spain. A Danish guy speaks Danish to him. Ulrich doesn’t say a lot. Still, I take down every word, as I will have to write a piece. «The album was finished a fortnight ago. It’s totally fresh. You are the first to hear it. I changed the sequence of the songs at the last minute. We recorded them in San Francisco.» That’s it. How about some questions? Reporters – whose very business is asking questions – are not given that opportunity on this occasion.

What am I supposed to write? I experience a quick panic attack until loud music blows any nasty thoughts out of my head. Ulrich has shoved the CD into the sound system. Immediately, the loudspeakers pound, howl and lash out. The music is raw, heavy and hard, it is like being dragged across cobblestones.

They hammer on about death and revenge and the end of the world, about moths going up in flames. No mercy, anywhere. But honestly: I don’t understand a word, not just because I’m tired after ten days of touring through the USA and reporting. It is because the lyrics are bellowed rather than sung. And yet I find that listening to this I am enjoying myself. The loud, raw, breathless sound is oddly soothing.

After some eighty minutes the last riff fades. Drummer Ulrich, lead singer James Hetfield (53) and lead guitarist Kirk Hammett (53) enter the room to mingle with the journalists, docilely drinking mineral water, posing. Metallica hired the photographer. The next day, each reporter receives a Dropbox link allowing them to download the pictures.

For the time being, I was sworn to silence. Until  November 1st there was an embargo regarding «Hardwired … to Self-Destruct» – the title of the band’s tenth studio album, the first in eight years according to Wikipedia. My story was «a bit thin,» complains my editor who wanted to save expenses by sending me. He’s right. But that simply was all I got.