Peter Hossli, a curious reporter who always finds a good story
0
Twenty-nine year old Swiss Pascal Mora is one of those young photographers who are drawn back to war zones again and again. He explains why he keeps doing this to himself and how he copes with the misery he encounters.

Mister Mora, you are a young photo journalist. Why do you go to war zones?
Pascal Mora: I’m interested in the Arab revolution. That’s why I went to Libya and Syria. At first it was almost impossible for photographers and journalists to report independently from Syria. The war was mostly being hidden from the public gaze. This makes first-hand reporting even more important.

How do you prepare for these assignments?
I did a training course with the German army, the Bundeswehr. Journalists are taught how to behave under fire or at checkpoints. Reality is another matter, though. That’s why journalists should always know what is happening, what the political situation in the country is like and who the warring parties are.

How do you prevent anything from happening to you during an assignment? I don’t take unnecessary risks. I won’t risk my life for a photo. I protect myself against bullets and splinters with a protective vest. In addition, I check out possible escape routes. Before I travel to the war zone I develop an emergency plan with friends in Switzerland. If I don’t get in touch with them for a few days, an automatic rescue chain sets itself in motion.

You capitalize on other people’s misery. How do you deal with that?
The entire media industry capitalizes on other people’s misery. That is the business of news. I don’t personally see myself as a profiteer; my costs are high, my revenues are low. I manage to break even. But then, I really don’t go there for the money. Journalists are eyewitnesses. It is our job to report on things that everyone is looking away from. 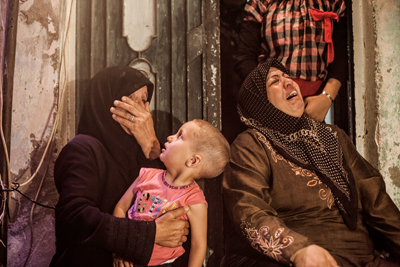 You are faced with death and misery in your work. How do you process that after your return home?
It’s not my purpose to shoot pictures of death and misery. In a war zone I’m interested in everyday life and absurd situations. Bombs fall on one place, and a few miles away people are shopping for underwear. The first few days after my return to Switzerland are mostly strange. All of sudden there are no falling bombs anymore – and the most important topic on the radio is the weather.

What effect can images from an area of conflict have?
In 1972, AP photographer Nick Ut shot a picture of a naked girl in Vietnam running away after a napalm attack. This photograph triggered a change of mind about the Vietnam War in the US.