Peter Hossli, a curious reporter who always finds a good story
0
Thirty years ago, Queen’s singer Freddie Mercury inspired Marco Grob. Today he is one of the world’s most sought-after photographers. 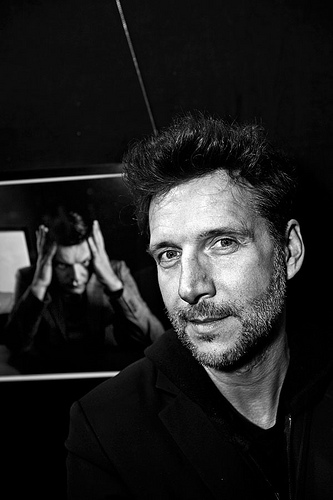 Switching effortlessly between English and Swiss German, the tall, athletic man directs a team of hard-working helpers somewhere on the outskirts of Zurich. They are setting up a studio for a photo shoot. Marco Grob, the athletic man, watches over every detail. He instructs a painter to white out the spots on a canvas. He personally turns on a fan so the paint will dry in time.

Everything needs to be ready for the arrival of Daniel Vasella, who is due in ten minutes′ time. The chairman of the board of directors of the Swiss pharmaceutical giant Novartis – who earns 22.13 million Swiss francs per year – is one of the “most influential Swiss people” that photographer Grob is portraying for Schweizer Illustrierte. The magazine will celebrate its 100th anniversary at the end of this year and has decided to treat itself to today’s most sought-after portrait photographer for its special edition. Grob, born in Olten, Switzerland, in 1965, lives in New York and takes pictures of everybody who is any- body. His client roster includes US periodicals like Time and The New York Times Magazine, major Holly- wood studios, companies like Nike and Tag Heuer, and the UN. Barack Obama has stood in front of his lens, as have Hillary and Bill Clinton, Steve Jobs and Lady Gaga, Uma Thurman and Leonardo DiCaprio.

So doesn’t it feel strange to be taking pictures of B-list celebrities like Vreni Schneider and Moritz Leuenberger for Schweizer Illustrierte? Grob shakes his head at this annoying question. “Every job is equally important.” That is the only way he can work.

He is wearing black trousers and a black T-shirt. His shoes, which he has taken off like everybody else, are black, as are his socks. The only white thing is the stubble on his face. He hasn’t shaved yet. “The perfect portfolio is one where you don’t see who the client was”, says Grob. When he picks up his camera he wants to shoot pictures that will “affect people, whether it’s in a book, a magazine, on a billboard or in a museum.” It doesn’t matter whether he’s shot Elton John or Swiss manager Vasella. Grob seems tense, nervous. Later he will say that he needs this restlessness in order to focus. He tries to cheer up the team – and himself – with a joke. “Even Vasella will have to take off his shoes – that’ll be fun.” Nobody laughs, as everyone is busy. About half a dozen assistants adjust lamps, meter the light, and move a tripod to the right spot.

Grob slips into his shoes, shuffles to the kitchen and eats a yogurt. The doorbell rings. It’s Vasella. “Okay, phones off!” Grob calls. It’s what he asked of his crew in the White House, and what he asks of this team in the old Zurich factory that is his make- shift photo studio today. He treats everyone the same, “with respect, but also with a certain amount of detachment”, he says. He avoids small talk. He doesn’t ask questions. “I can’t afford to establish a relationship before the shoot or the relationship will exist outside the camera. The camera is all that matters in this business.”

Once he’s got his shot, he says, it can get really nice. He chatted with Bill Clinton for half an hour. With Jeff Bridges he played the piano, with Michael Douglas he had a three-hour lunch.

“Grüezi”, says Grob, shakes Vasella’s hand and turns away. An assistant guides the manager to the make-up room. Two minutes later he stands in front of the canvas, wearing his shoes, of course. Grob snaps his fingers. Everybody hurries to a pre-as- signed position. The team is like a well-trained corps de ballet. Everything moves quickly, without appearing rushed, the transitions go smoothly.

No one talks except for the photographer, and he doesn’t say much. “Down a bit.” “Very nice.” “Good.” “Yes, that’ll work.” He presses the shutter release, twice, three times, eight times. “Yes, very nice.” Another two. “We’re done and you’re looking good.” Vasella is amazed at how quickly it has all gone. Other photographers take hours for a shoot. This star Swiss photographer needs two minutes, five max. “For an authentic picture – and that’s what I’m after – you don’t need more”, he says. “Anything beyond that is phony.” Most people’s attention span is usually no longer than two or three minutes. “If I don’t manage to capture real intimacy in this amount of time, I never will.”

He uses a poetic metaphor to describe his approach. “A small flame is burning in front of me while a strong wind is blowing. It is my job to shield the flame until it goes out by itself.”

He has a short conversation with Vasella about the camera, a digital Hasselblad, then he turns away, says goodbye, and talks to Tara Rice, his assistant. “Tara, would you pull the photos down?” he asks her. She saves them on the computer and two external hard drives. “Check for spots”, he says, “please.”

Grob is always polite. He knows the people he works with are essential. He pops a stick of gum into his mouth and cleans the smudged lens.

Grob takes photographs “because I want to achieve something that is bigger than me”, says the tall man. The photos he perused in his mother’s magazines when he was a boy had a profound impact on him. His mother was a seamstress and brought home Vogue and Harper’s Bazaar. He started out as an assistant in Los Angeles, opened a studio in Switzerland and started travelling the world in 2003 with no fixed abode. In 2008 he finally decided to move to New York, the “Mecca of photography”, as Grob puts it. “If you want to become a pilot you move to the Mojave desert; as a photographer you go to New York.” He was past forty when he arrived in Manhattan, even though a friend had told him 25 years earlier that he should go to New York and do portraits. Grob, being the cautious Swiss type, didn’t dare to take this step for a long time. He had doubts that portraits might be too banal. For years his talent remained untapped. Now he has agents in New York, South Africa and Switzerland. His Moscow agent also takes care of the Asia business.

Until the beginning of 2011 he took on any assignment that interested him. Now he has to turn down jobs for lack of time. He spends 200 days out of every year travelling. He shoots photos for the UN in Kabul. He portrayed 100 personalities for TIME magazine for their 10th anniversary of 9/11 issue. He travelled to South Africa for US cable channel HBO to shoot pictures for an ad campaign for one of their new TV series.

Tara Rice, a young Virginia photographer, is always by his side. She is his assistant and acts as a go-between for Grob and his agents, who book his assignments. There is one rule Rice needs to adhere to: She must only tell Grob about a job once it is absolutely certain.

Photography helps him push his boundaries, says Grob. For instance, when he is standing in the middle of a minefield in Afghanistan or when he is sweating in the blazing heat of an Indian steel plant. Or conversely, when he is observing the US president at work in the Oval Office. It’s his way of creating “memories that will last forever.” He says that this is his reason for living. “The photos I end up shooting are just a by-product.”

Marco Grob on Marco Grob
“I grew up in Olten, a hick town in Switzerland. When I was 15 I briefly interned with a photographer. ‘You’re not talented’, my master told me at the time. During my apprenticeship as a mechanical engineering drafts- man from 1980 to 1984 I worked weekends as a stagehand for the event organization Good News. Those times were like a window on the world to me. Absolutely fantastic! – AC/DC, Queen, The Who… I got to get up close to them. To watch Freddie Mercury giving everything he had, time and again, was just mind- blowing and helped me develop my work ethic: Give everything you’ve got and hope it’s enough. Always take your job seriously – but don’t take yourself too seriously.
I began to roam the world. I worked as an assistant to a woman photographer in Los Angeles. I had my own studio. I lived in South Africa. In every setting, I was always looking around. In early 2008, I moved to New York. It took me seven months to land my first photo for the US market. It was an assignment for New York Magazine. My big break was a cover shot of Hillary Clinton.”