Peter Hossli, a curious reporter who always finds a good story
0
Annabelle Selldorf is one of New York's best-known architects. Her latest project: a car lift for a 19-floor apartment building. 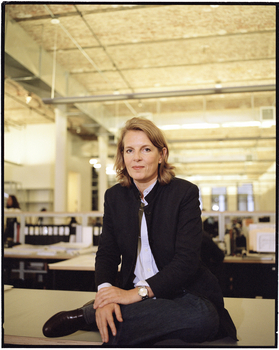 Finally, she’s here. Annabelle Selldorf had left the team of reporters waiting for half an hour. A meeting she had been directing lasted longer than planned. “I really hate these interviews,” she says as she’s sitting down in an office chair by Mies van der Rohe. “It always takes up so much time.” Time is something the German architect in New York has far too little of. Often she is the first to arrive at the large office at Union Square. Usually she is the last to leave.

She is wearing tight jeans and a white shirt with blue pinstripes, covered by a blue business jacket. Selldorf is the new star among New York’s architects. She expands and refurbishes galleries for art dealers; she renovates and decorates expensive homes for affluent New Yorkers; she outfits fine boutiques for corporate groups. Customers appreciate her quality standards and her notable love of detail.

Her newest structural novelty is currently shaking up the New York architecture world. She is building an elevator alongside a 19-story apartment building that allows residents to park their cars at a lofty height right next to their apartment. Too bad for paparazzi, who love to photograph stars on foot. In this house, fame can drive by unseen. 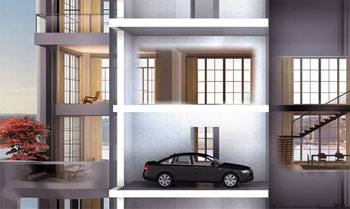 The building, which will be ready for move-in at the end of 2008, is in west Manhattan on the corner of 24th Street and Eleventh Avenue, a stone’s throw away from the Hudson River. That’s in Chelsea, a neighborhood that once held giant storehouses, then exciting galleries opened their doors, and now it contains elegant luxury homes. Selldorf wanted to make a reference to this history. Above all, she has an urgent problem to solve: where can the residents park their cars?

“It’s a paradox,” says Selldorf. “More and more people who can afford a car are moving to New York, but there are fewer and fewer parking spots.” New York is definitely no city for cars. Even the rich ride in taxis and take the subway. “But whoever can afford an expensive apartment usually has at least one car, if only to drive to their country house on Saturdays,” she explains.

Since the groundwater is especially high under the construction site in Chelsea, Selldorf couldn’t design an underground parking garage. “The auto lift was a logical conclusion,” Selldorf says. She is proud of it. “There isn’t yet anything like it in New York.” The idea, she confesses, was not her own – the client suggested it during a standard meeting.
It was a good idea. Although the building is still in structural work, 12 of the 16 apartments are already sold, despite steep prices between 6.25 and 17.5 million dollars for a penthouse with roof garden. Each buyer gets a spacious two-story residence – between 870 and 1375 square feet – and a parking spot at 108 square feet. The roof heights are immense, at between 13 and 26 feet.

Just now an assistant brings her a cup of coffee and a glass of water. Her workspace is separated by bookshelves from the open office. It is loaded with European and Chinese art books. Modern paintings hang on the walls; a sisal rug is on the floor. Selldorf runs her hand through straggly blonde hair. Her face is sharp-edged and rather serious. A silver Rolex ticks on her wrist.

Selldorf herself is not moving into the apartment building. “I can’t afford it,” she says. But she does own a car and a house in the country. There is an Audi in her garage, a German car, which is “just a coincidence,” she says. “It’s a good car.” Though she’d rather drive an Alfa Romeo or a Maserati. “I like to drive fast, and I like to drive for a long time.”

She is not intellectually concerned with cars, but rather with the question of how and where people live. “That is my favorite topic,” says Selldorf, who sees a resettlement into cities. “Because the migration away from cities didn’t work,” she is convinced. “Cultural life never really came into bloom in the suburbs.” In contrast. “We are seeing a loss of community.” For that reason, cities have undertaken a few projects to make them more attractive to families. “Housing will be in high demand if families feel at ease there.” Today, life in urban centrals like New York is just as safe as in the country, she says.

In addition to this migration, she sees a trend towards larger living spaces. It does have an effect on the construction of buildings if women have fifteen pairs of shoes instead of ten. Although it used to be normal for two children to grow up in the same room and the whole family to share a bathroom, “today, each child needs their own room, their own bathroom and a playroom to boot,” says Selldorf.

The demands on bathrooms and kitchens have grown. A wine cooler is just as standard as a second dishwasher. Bathtubs include a shower and a long counter. “People want to relax much more in the bathroom, rather than just wash,” Selldorf says. “It doesn’t have much to do with function anymore,” Selldorf says, who sees her architecture as always driven by function. “Today it’s more often a matter of interpretation of what someone is expecting in a bathroom.” Work is also mixed more often with home life. So she always plans enough space for offices or studios in new buildings. 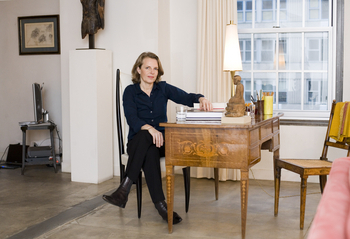 She herself lives modestly in the former Bohemian quarter Greenwich Village in a building erected in 1915. Her kitchen is tiny, and she only recently installed a dishwasher. “Those accessories are not so important to me,” she says. She likes space, light and proportion. From her living room she can look down on famous Fifth Avenue. Sunlight flows through the simple room in the early morning.

Seven years ago she moved from Soho to Fifth Avenue. First she opened up the rooms. There are neither walls nor doors between the bedroom and living area. There is no carpet on the naked stone floor. The art is decent and personable. Individual modern and antique pieces serve as furniture. For breakfast, she eats porridge and drinks tea. “Since I’m always on the go, I don’t need much space anymore.”

Annabelle Selldorf, 47, was born in Cologne. Her father is the architect and furniture designer Herbert Selldorf. At twenty she came to New York to study architecture – she didn’t get a position in Germany. She studied at the Pratt Institute and later in Florence. Her first New York accommodation was a basement apartment in the Upper West Side, without windows. That was 27 years ago. Today she runs an architecture company with 40 employees, as a “good-natured dictator,” as Selldorf herself describes her leadership style. “I have very precise ideas of what I want from my people and am disappointed if someone doesn’t go along.” She likes to work in teams, and she wants colleagues who “are just as fascinated by a project as I am.”

Her portfolio is impressive and diverse. Under no circumstances does she want to become repetitive or formulaic. “For each project I start at the beginning, since each customer is different.” With this approach, she renovates or builds galleries for the giants of art dealership, for David Zwirner, Barabara Gladstone or Hauser & Wirth. She has designed retail stores for the clothing manufacturer Abercrombie & Fitch. Her greatest success is the Neue Galerie, a culture and art institute run by Germany and Austria in New York. Wealthy people and Hollywood stars sign her on to build their houses. She designed the interior of the Urban Glass House, the last project of legendary architect Philip Johnson. 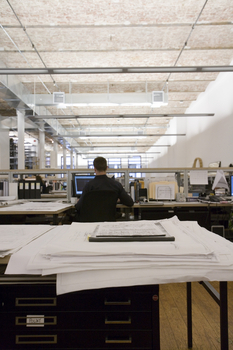 A few years ago she also began to design furniture, which she sells under the label Vica – a company that was once founded by her grandmother. “As if I didn’t already have enough to do,” she jokes. The desire to design furniture arose out of necessity. Often she would find that the matching sofa or matching dining table didn’t properly furnish a residence that she had renovated. So she just designed her own sofa or chair.

That much work brings not only fame, but also money. What does it mean to her? “More money, more shoes,” says Selldorf. Finally flashes of her dry humor, making her seem softer. Money doesn’t motivate her. She simply takes “great joy in good architecture.” Indeed, a “deep spiritual quality” radiates from a successful building. “It stands above everything and includes everything.”