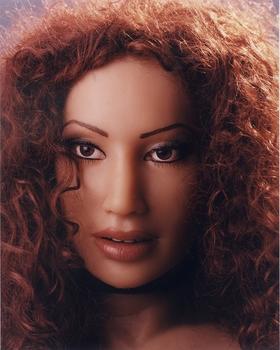 Leah fits the average male’s criteria. Pretty face, but not too pretty, her breasts are round and firm, but not huge. Her legs are long and her hair is mid-length. She never nags and always smiles. Men like average women even when they’re recreated.

Leah looks like a woman, has the same weight as a woman, the same body orifices, and one day soon she’ll even be able to speak and moan controlled by computer. Leah is a sex doll and a bestseller, a Realdoll. Supposedly she’s like a real woman, almost completely cast from a secret mixture of Japanese silicone that looks and feels like flesh.

The now 37-year old artist Matt McMullen created her in 1996 when he grew tired of making scary Halloween masks. He switched to the “female form” “because as a kid I always liked it so much.” McMullen is a young, cool guy with two rings in his left ear and a t-shirt with a Japanese dragon. He founded the firm Abyss Creations in 1997 and as he puts it, “a sexual revolution” broke out.

San Marcos, an hour’s drive north of the Californian beach town San Diego is one of the many nondescript towns in southern California. Shopping strip centres, warehouses, snackbars, concrete, palms and the Pacific Ocean. The windowless Abyss production factory stands a stone’s throw away from Highway 5 connecting Los Angeles and San Diego. There’s no company sign. Nothing on the outside reveals the sex dolls being manufactured by craftsmen behind the grey-brown walls. 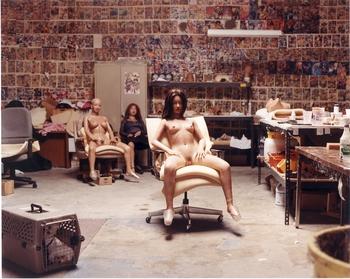 Daily, a Leah, Kim, Tami, Stephanie, Nika or Stacy is produced here. These are the six names of the most popular dolls by McMullen. The standard model costs USD $6,499. At the reception Shelly Couture awaits us, a Canadian woman with Irish roots. Her red hair is unkempt and she’s wearing a headset with a built-in microphone. The spokesperson for the company also advises clients on the phone and monitors the bubbling silicone brew. “Call me Shelly”, says Couture with Californian ease. She guides us through the white waiting room where six clothed dolls are displayed, straight in to the production hall. The factory resembles an artist’s studio. The walls are wallpapered with Japanese Manga comics. It smells of paint and crude oil.

Director McMullen creates the designs, his wife Kimberly, an accountant, keeps the books. Seven employees make the dolls. One person makes the frame out of metal and vinyl. Sculptors cast three different moulds out of hard plastic, one for the body, a second for the breasts and a third for the head. Liquid silicone is poured into the moulds. Painters paint the skin, lips, and fingernails and set the eyes in. Neatly laid out are a half dozen hairless heads resting on a frame. Wigs made in China are stored in paper boxes with see-through lids. Every finished doll is dried, dressed and packed in a wooden crate lined with Styrofoam. Padded belts stabilise the head, upper and lower bodies for transport.

Before the containers are shipped by airfreight, Shelly sticks a few plastic flowers in the artificial hair of the expensive cargo. “That pleases the customer”, she says and closes the box stamped “Fragile – This Way Up”. 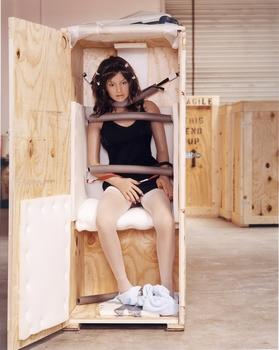 Realdoll creator Matt McMullen went to art school and later worked as a sculptor. As an artist he remained unnoticed, until he created a realistic looking mini woman. She was two feet tall – and naked. He placed a photo of her on the Internet and it sparked an interest. McMullen received hundreds of e-mails asking if his doll works. “At first I didn’t understand what they meant by work”, he says. McMullen caught on quickly. “A few days later I founded a company. Without even wanting to, I landed in the sex industry.”

The next sight is horrifying. Nine naked dolls are dangling from iron chains. Plastic poles are wedged in the hollows of their knees spreading their legs apart. One doll is missing her hands and feet and none have pubic hair. Ma, the Chinese painter will stick it on according to the order forms today. These dangling, headless bodies generate an even stronger feeling of revulsion than the finished, lifeless dolls. The artificial bodies look as though they can feel pain.

Is the always-available sex doll, another woman-despising evil spawn for male dominance over the female body? “I don’t have a problem with it”, says spokesperson Shelly. “The Realdoll is very honest. It’s about pure sex. If that’s what somebody wants, that’s fine. Better than pretending to have an interest but really only wanting sex.” Repressed America can finally live out whatever it lusts after.

The Realdoll doesn’t smell like a woman or perfume, she smells like unrefined oil. The smooth, flawless surface doesn’t feel at all like skin. More like sticky slime, that green toy goo that kids love to ooze through their fingers on the playground. With plenty of baby powder and regular use the sticky skin becomes supple, promises Shelly.

Every doll is put together according to the customer’s wishes. The dolls come in 16 different faces and ten body types. The customer determines the breast size, skin colour, body and hair length. Also, men can choose the type of hairstyle, eye colour and shape, make-up and the type of pubic hair – curly, shaved or trimmed. Every doll has three washable orifices. 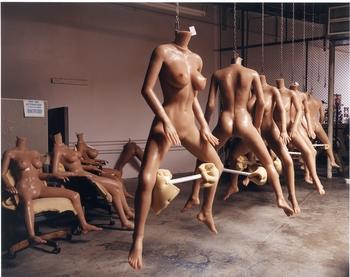 The doll has its limitations. It works best in the missionary position. The instructions advise against too wild behaviour: “The Realdoll must be handled as carefully as a real woman.” Regular cleaning is recommended, preferably in the shower or bathtub. It comes with a minor repair kit containing extra silicone, a sponge and glue to fix tears and scratches. A doll will last at least ten years according to salesperson Couture, although when we were preparing for a photo the photographer broke Stacy’s neck.

Those who are interested can come and have a look at the different models in the factory. On this Friday two Japanese men have come by. Both are wearing designer shorts and blue baseball hats. On their wrists are Swiss watches. Shelly leads them in to the showroom. There they examine Leah, Kim and Stacy. They squeeze breasts, look inside mouths, feel the labia and choose wigs. Within 30 minutes they’ve decided to purchase three dolls, each the price of a used car. “We’re really delighted about it”, is all they say.

Abyss Creations guarantees discretion. Names and addresses are only noted after the order and down payment have been placed. The shipment is sent in a plain wooden box. Two weeks before delivery the recipient is informed according to his wish, either by mail or telephone. The payment is done discreetly by cheque. “If a person lives in a small town they write ‘engagement present’ on the cheque”, says Shelly. During shipment these objects of desire wear skimpy little nylon dresses and always a bra.

Matt McMullen says he has no idea why the demand is so great. He developed his Realdoll supposedly with the intention of only “selling a few dozen and then doing something else.” Since then he’s made hundreds. It takes 18 weeks from the day an order is placed until delivery at home. “We could produce them faster and sell more,” says McMullen,” but the quality of the dolls would suffer. We guarantee top quality products

“I just received my Realdoll. I gave her a name the day she arrived. She’s called Regina. I have to say, she’s my dream woman. The girl I never got in middle school or later on”; thanks from a customer per anonymous e-mail for the prompt delivery. “I’m from Wisconsin. It’s cold here and the ratio between men and women is bad. Regina gives me the best sex, I’ve ever had (better than with any real woman). I don’t need to worry about diseases or an unwanted pregnancy, which makes sex much better. This is a message for all you guys out there: If you’re sexually frustrated, lonely, depressed or if you’ve had enough of the bar scene, believe me a Realdoll is worth it. I am happier today than I’ve ever been.”

Another customer, Shelly says, wrote: “You have to urgently add a warning that says that ‘The orgasm is so intense, that you can faint.” And the big-mouthed radio and TV talk show host Howard Stern says: “Oral sex with the Realdoll was better than with a real woman.”

Business is booming – totally without advertising. Abyss has not placed one advertisement, either in a newspaper or glossy magazine. The 10,000 Internet surfers that visit the website every day are enough, plus press releases and word of mouth. “When people hear about our dolls, they tell others”, McMullen believes. He estimates the turnover potential is about a thousand dolls per year. Success makes McMullen cautious. He despises the stock market. “Artistic freedom is more important to me then money. I don’t want to be accountable to anyone.” He fears doll robbery. That’s why he refuses to patent the dolls. “I don’t want anyone to steal the blueprints from the patent office”, he says.

One problem is the flourishing discount business. “Many can’t afford a new silicone doll”, says Shelly. “Our customers want a change, so they also trade dolls amongst themselves.” On different websites it’s possible to acquire discontinued models. It’s a “huge underground movement that we have no control over”.

Internationally the interest is growing rapidly. Fifty percent of the orders still come from the USA, but rubber loving Germans and Japanese are catching up quickly.

McMullen’s goal is the substitute wife. “I’m not God, but my dolls should resemble a human being as much is possible”, he says. “The more realistic, the better.” He’s already in negotiations with software companies in Silicon Valley. They should animate his silicon dolls with fast silicon chips. An external highly sophisticated computer will teach Leah and Kim to speak. In the future, the vagina, mouth and anus will have chips installed that will unleash movement when they are penetrated. “Of course the dolls will moan”, he says. Also, movement in their blank, staring faces is of great importance to him. “Just a small movement in their cheeks – and the customer would believe their Realdoll is real”, says McMullen.

In e-mails people request that their dolls cook, iron and clean. Robots can do all that. However, “Why shouldn’t robots be sexy?” asks McMullen. Also, of great interest are customized dolls, so-called she-males – a woman’s body with a penis in the crotch. These sell brilliantly. Now there’s also a male Realdoll available, named Charlie. He sells for a bit more at USD $6,999. “Mostly gays were asking when the artificial male would be available on the market”, says Shelly. But also many women who:”just want pure sex without all the arduous trappings that go with it.”